Skip to main content
Spring 2017 Street Smarts and the Arts

On the outskirts of downtown Raleigh, a two-story tan house provides some relief.

Young, homeless men and women stop by the facility, a local nonprofit outreach center, to pick up what they need: food, clothes, toiletries — the things you’d typically find at similar drop-in facilities.

Not long ago, however, those who visited the center also had access to something more unexpected, something less material and perishable. Something they could keep for a lifetime: poetry.

Throughout 2016, a group of NC State creative writing graduate students introduced poetry to the men and women who visited the center. As part of their own literary outreach program called Street Smarts and the Arts, the students hosted informal poetry workshops with the young people who passed through the center. It wasn’t a structured “I’m the teacher, you’re the student” environment. Rather, the students spent a couple of hours twice a week hanging out with the center’s visitors, reading from interesting poets and trying out new ways to infiltrate the writing process.

“For a while, we were just listening to instrumental beats,” says NC State MFA student Alabama Stone, a co-founder of Street Smarts and the Arts. “The guys would freestyle, and we’d record them, transcribe the recordings and then show it back to them — ‘Look, this is a poem you did.’”

The gatherings became a street poets society of sorts, with nearly a dozen writers penning unique work. Their unfiltered verse offered raw insight into an often-ignored side of city life that touches on themes connecting us all: love, morality, dignity, justice.

Despite their successes, the workshops have ended. Funding shortfalls last fall led the outreach center to drastically reduce its hours, and attempts to meet at other locations — places that don’t offer the same level of service — have been unsuccessful.

Yet all is not lost. A new anthology produced by Stone and fellow MFA student Tyree Daye preserves the poetry of the homeless writers they worked with over the past year. Including everything from lyric essays to narrative poetry, the anthology features poems from 11 writers.

“The Pancake Stack: Recipe for Disaster,” was written by Y.C.A.N.N., age 22, Newark, New Jersey, and read here by Alabama Stone.

“What’s most important for me in any book is how much hope it has in it,” Daye says. “That’s what is great about the anthology. There are poems that are seriously heartbreaking, but there’s a great amount of hope in the book as well.”

When the group was still meeting, Stone and Daye led the homeless writers through a typical editing process, even to the point of crafting personal biographies. Some students chose to go by their given name, while others used a nickname to identify themselves. Going through these steps led the writers to take true ownership of their work, says Belle Boggs, a professor in NC State’s MFA in creative writing program and the faculty adviser for the Street Smarts project.

“What I watched Alabama and Tyree do was partner with these students,” Boggs says. “They were already teachers, educators and poets, but the teaching they did with these students is very different from the classes they teach at NC State.

“These students were incredibly pressured by their environments and life experiences, so Alabama and Tyree had to be very flexible and creative,” she says. “They had to work to build trust with their students.”

Stone and Daye bring impressive credentials to their outreach effort.

Stone, a poetry candidate from Greensboro, is the recipient of the 2017 Robbie S. Knott Scholarship from the Department of English. Her poetry has been published or recognized by several literary magazines, including Blue Mesa Review, Crab Fat Magazine and (parenthetical). As for Daye, a poetry candidate from Youngsville, he is a Cave Canem fellow and the author of the forthcoming collection River Hymns (Copper Canyon Press/American Poetry Journal), which won the prestigious American Poetry Review/Honickman First Book Prize for 2017. Both students teach introductory creative writing courses at NC State.

You could see them start to realize their existence, and how powerful that is. It’s the reason poetry exists.

Stone and another MFA student, Will Drake (MFA ’16), created the Street Smarts program in spring 2016 as an independent-study project. Their original idea was to hold the poetry workshops at local schools and community centers in low-income areas. But given the large population of homeless youth in the area, Stone said they decided instead to partner with Haven House Services, a local nonprofit serving at-risk youth and their families. Specifically, they chose to work with Haven House’s Street Outreach Program, which at the time provided life-skills classes, job training and basic assistance at its outreach center three days a week.

Stone spent three months volunteering at the center before mentioning anything to anyone about poetry. Slowly, she got to know the people behind the familiar faces who stopped by. “Walking in the place, they may not speak to you, and they may see you as someone who is going to get your community service hours and dip,” Stone says. “But when they start seeing you there more often, they ask about your name, where you’re from — you get to know one another.”

Poetry became part of the conversation. During two informal workshops each week, the MFA students tried different methods of offering up poetry that was both readable and accessible. Wednesday was “class day,” when they’d read from poetry handouts and go through writing exercises such as the instrumental freestyling. On Fridays, they’d just hang out, occasionally discussing and reading new work.

Some classes drew a dozen people. Others brought only one. Still, the writers who returned, many of whom hadn’t finished high school, were finding their voice. They began sharing more and more on the page. Some of the writers found housing, yet continued coming back.

“You could see them start to realize their existence, and how powerful that is,” says Daye, who came on board after Drake graduated in 2016. “It’s the reason poetry exists.”

Working with Boggs, the MFA students solicited more than $2,500 in new, donated poetry books from Copper Canyon Press and Graywolf Press. They cataloged the books and found a bookshelf to store them at the outreach center. With a $500 grant from the Humanities and Social Sciences Office of Research and Engagement, the students also purchased more books, pens and pocket-sized notebooks — stamped with the program’s logo — for the writers.

I was so angry, but I was able to deal with it by pulling out my notebook.

Stone and Daye typed new poems as the writers finished them, making sure not to lose any work. They also helped the writers memorize and recite their poems.

“They’ve said things like, ‘I was so angry, but I was able to deal with it by pulling out my notebook,’” Daye says. “And the talent is unbelievable.”

A few of the writers came to campus to visit Stone and Daye at their workspace in Tompkins Hall. Others attended a reading at NC State by Pulitzer Prize-winning poet Yusef Komunyakaa.

“We wanted them to see us working here and see that we’re bouncing ideas off of one another,” Daye said. “One student started looking into going back to school.”

The workshops continued until last fall, when the outreach center lost a federal grant that largely supported its operations. The center reduced its schedule from three days a week to a two-hour weekly drop-in session.

The shift prompted many of the street poets to stop visiting the outreach center. “They didn’t have a space to belong to anymore,” Stone says.

Stone and Daye tried to revive the workshops at a public library nearby. They spread the word about the new location when they saw the writers around town. They even designed promotional information cards, printed with the time and place. But no one showed. The outreach center had been a more welcoming place because it had been designed specifically for that population. The library, although a public facility, didn’t offer the same range of services or the same kind of safe space. 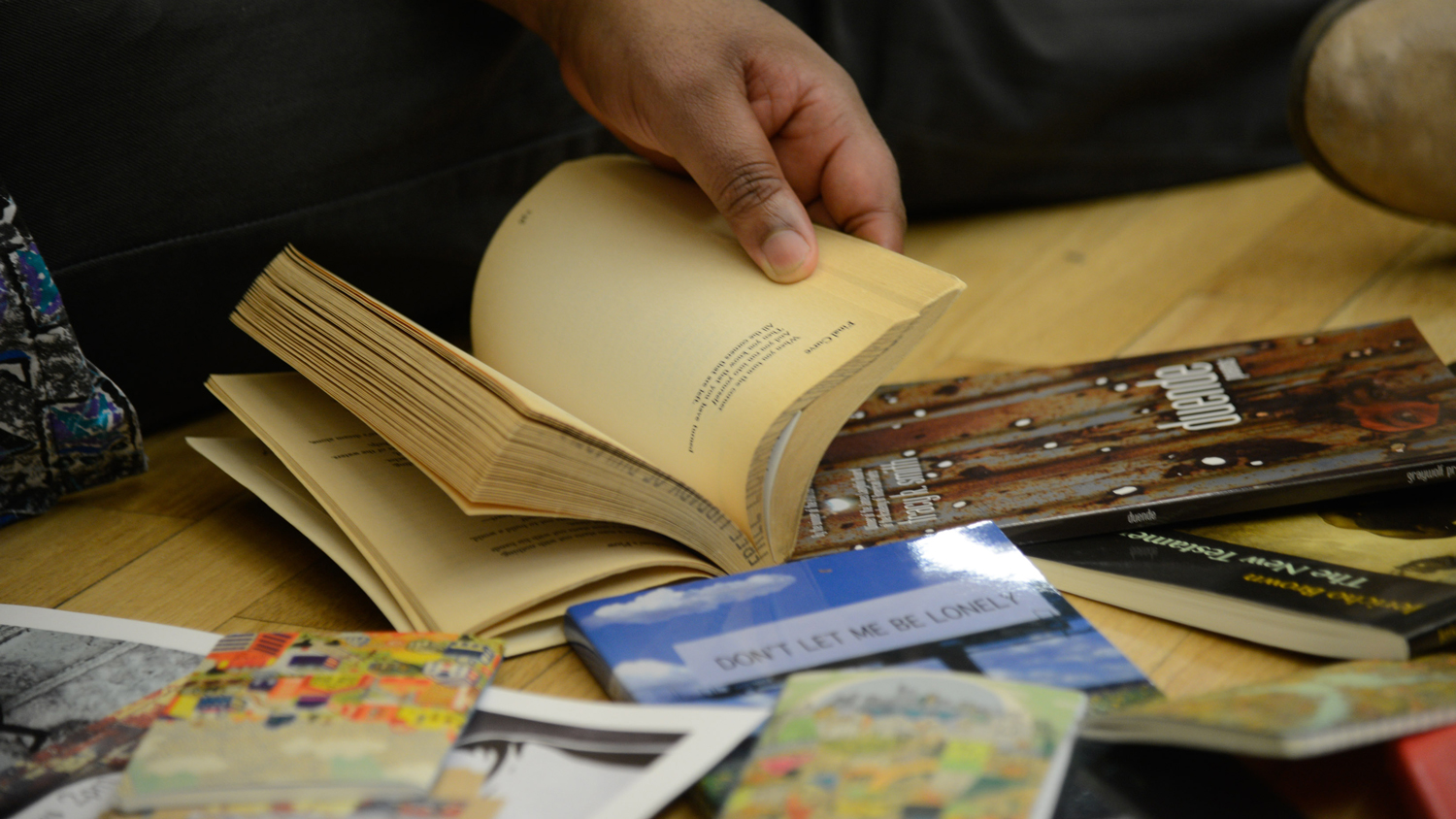 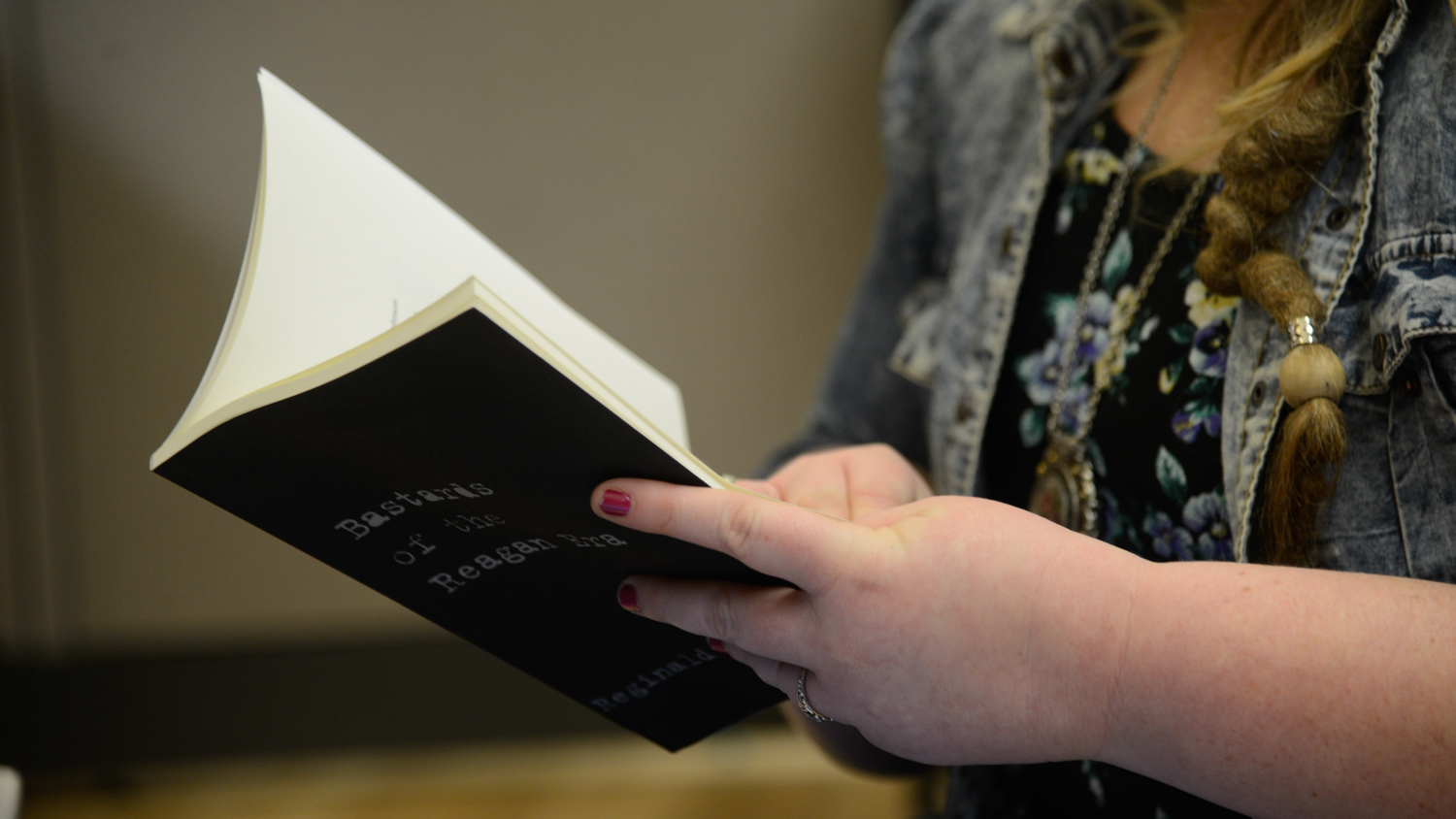 “While this is an outreach program, and it sounds good, a lot of times people are surprised when I tell them, ‘Our students are sleeping in the woods,’” Stone says. “Some are on couches at friends’ houses. Some students are camped out and living on the streets of Raleigh.

“Poetry has been so important in my life and in Tyree’s life that the fact that we can do this is great,” Stone continues, “but it also needs to bring attention to these street kids.”

The workshops have ended — for now, at least. The MFA students, who graduated this spring, are hopeful others will take up the cause, either through a similar program or through humanities extension work in K-12 classrooms.

Still, on paper, the street poets society lives on. The anthology will continue to tell their stories. It will keep being a voice for a community unheard. It will always be an example of what’s possible when people give art a chance.